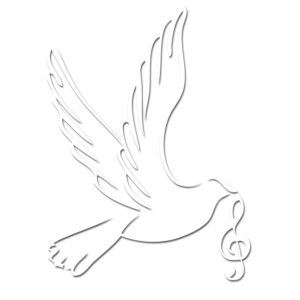 In collaboration with the Chamber Music Association of Zurich Universities Faculty 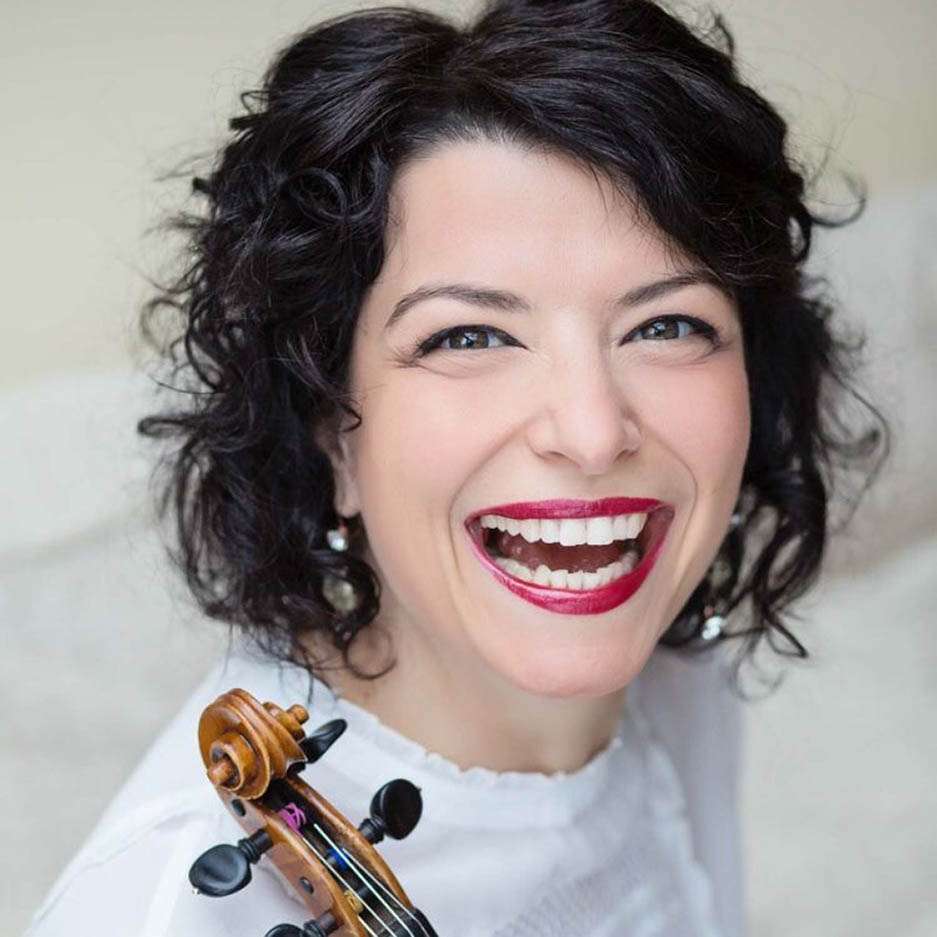 Her career as an orchestra musician began in 1998 at the Academy of the Staatskapelle Berlin. Afterwards she accepted her first position as Principal Second Violin with the Hamburg Philharmonic State Orchestra. From 2001 until 2010 she held the same position with the Bavarian Radio Symphony Orchestra in Munich.

Since 2010 she has been appointed as Artistic Director of the International Chamber Music Festival Wassenaar and in 2012 she was awarded the Culture Prize of the City of Wassenaar in recognition of her efforts in music education.

In 2020 she was conferred with the distinction Knight of the Order of Arts by the President of Romania. 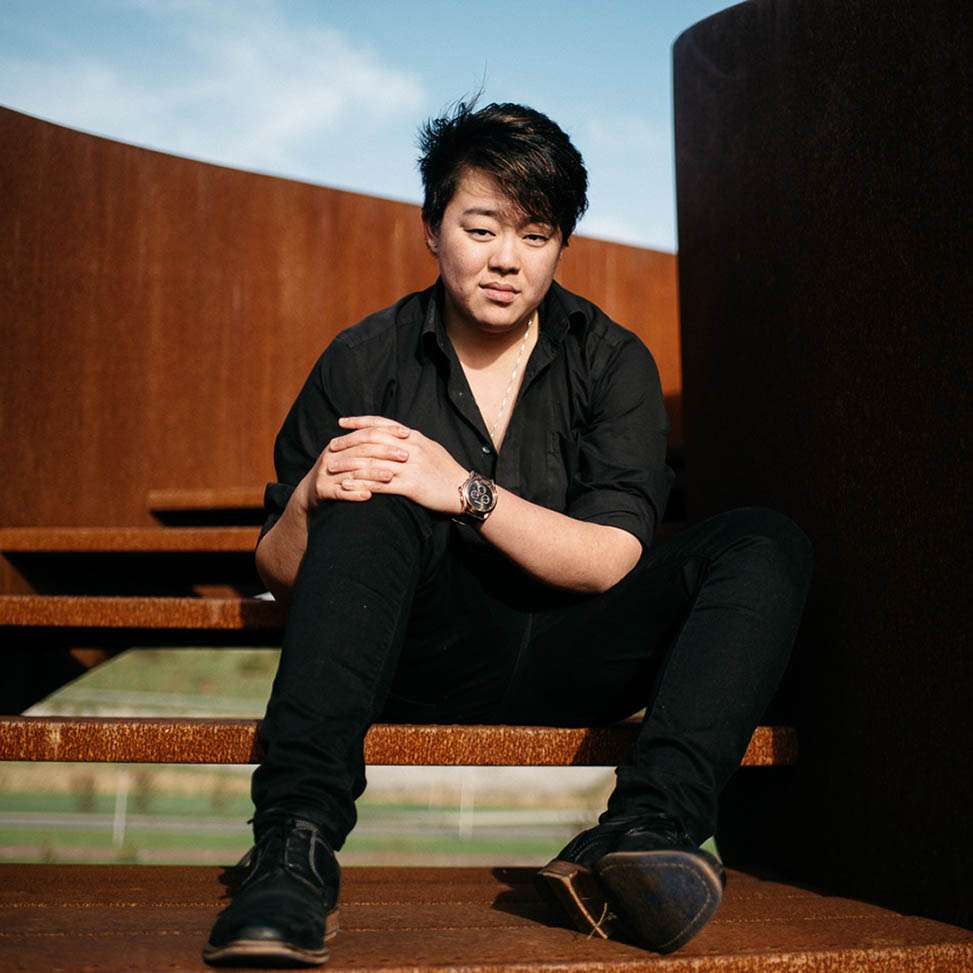 Kristie Su (born in 1995) began her violin studies under the guidance of her father, Elmer Su, at the age of three. At age five, she began taking violin and viola lessons with profs. Vesna Gruppman and later Igor Gruppman.

Since an early age, Kristie has shined as a soloist. In 2010, she won the 4th prize at the International Stradivarius Competition held in Salt Lake City, Utah. She was the youngest competitor to be accepted into the Carl Nielsen International Violin Competition of May-June 2012, taking home a Special Prize. She has also made several solo appearances with numerous orchestras all over the world. She made her European solo-debut in the Grote Zaal of de Doelen concert hall in Rotterdam (NL) in 2013. Later that same year, Kristie was featured as a soloist in the annual Gergiev Festival, held in Rotterdam.

Not only is Kristie featured as a soloist; she regularly appears as guest-concertmaster in various orchestras, working with renouned conductors. She also has a passion for chamber music and plays often in different ensembles.

​From season 2019-2020, Kristie serves as Concertmaster of the Opera Ballet Vlaanderen (BE). 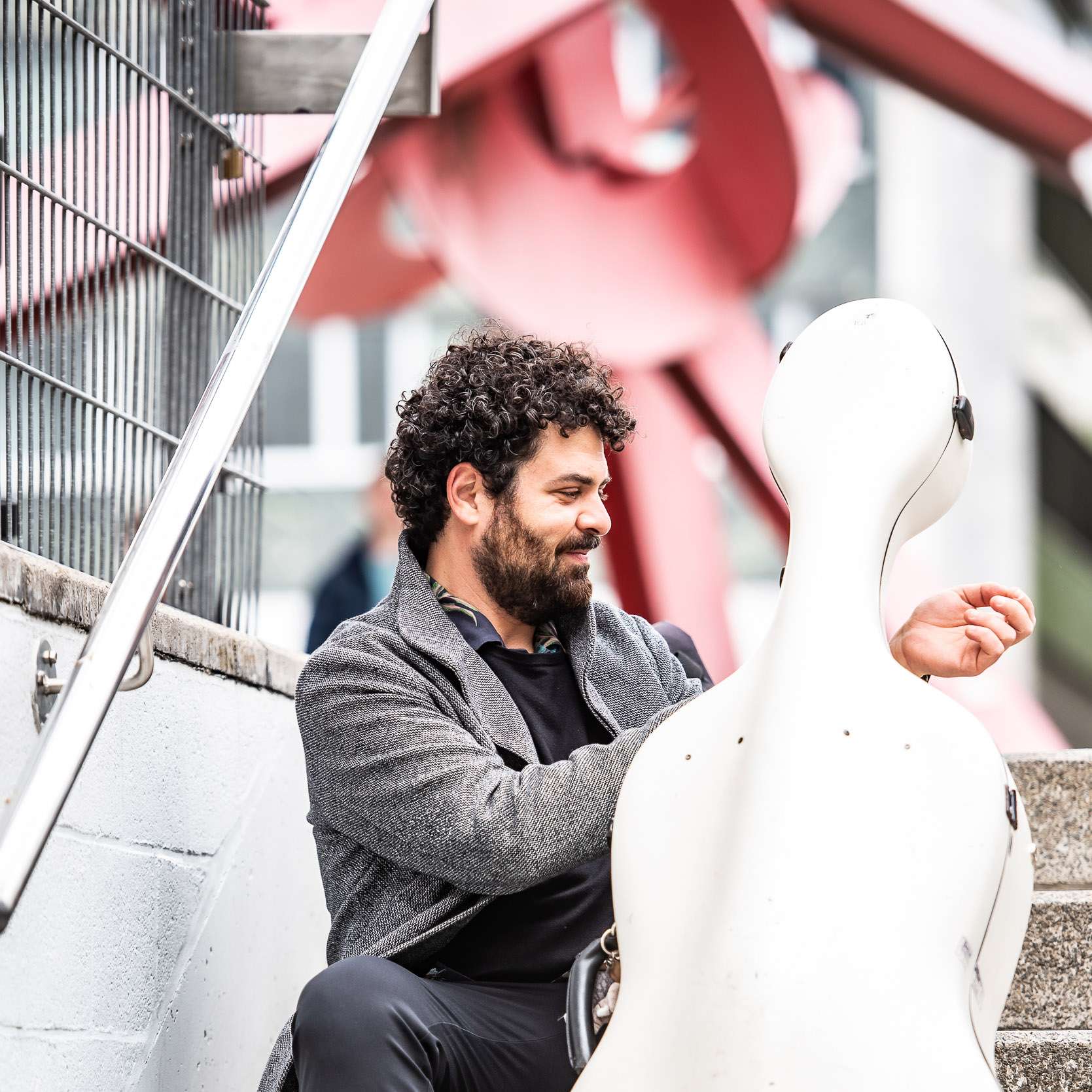 The award-winning Israeli cellist, Ofer Canetti, was born in Israel. By the age of 20, Ofer performed in most of Israel concert halls and series and got recognized by winning national prizes and grants. During the following years he completed his degrees in Israel, Germany and Austria and had the privilege to get guidance, inspiration and support from some of the world’s most acclaimed cellists and musicians such as Prof. Uzi Wiesel and Prof. Clemens Hagen.

During his studies he performed his Debut Recital in the Carnegie-Hall, New-York. Since 2019 Ofer is a Solo cellist of the Stuttgart Chamber Orchestra. As a soloist and chamber musician he is regularly invited to perform with many orchestras around the world, in countless festivals and concert series, among them, Ofer is a many years resident cellist in the Arte Amanti Festival in Belgium and the Halieti Festival in Slovenia. In those opportunities Ofer is cooperating on a regular basis with numerous appreciated international artists.

Ofer is also dedicated to teaching cello playing and chamber music performance and shares his experiences in courses and through giving masterclasses in universities around the world. Lately Ofer was teaching, among others, in the Royal Conservatory of Music in Brussels, in the Prague Conservatory and the chamber music programs of the Uni Zurich. Ofer is a very active chamber musician. From a very young age he performed regularly concerts and toured often with his father the violinist Robert Canetti which lead the path of the art of chamber music perceptions and understanding.

Some of his past activities include founding the “Testore Quartet” (2011), with them he had won several prizes joining the “Aviv” quartet (2015) for concert tours around Israel and Europe including concerts in Europe most respected chamber music series such as in the Wigmore hall, London.

Ofer was a member of the highly acclaimed “Amar Quartet” in Switzerland (2017-2019) with them he regularly performed in many festivals and venues around Europe as well as international tours. He performs regularly as a guest principal cellist in numerous orchestras and held principal position in several ensembles and orchestras, including the SWR symphony orchestra, the Salzburg Chamber Soloists and the iPalpiti Festival Orchestra, where in 2016, he was recognized by the “Los Angeles Times” as a “Superb Cellist” after the live recordings from the Disney hall, LA, US. 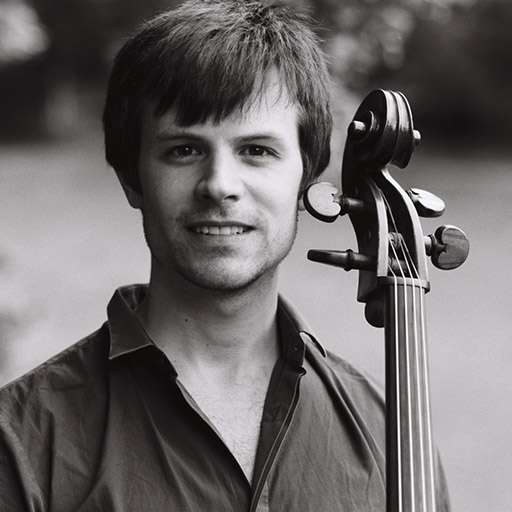 Flurin Cuonz was born in Winterthur, Switzerland in 1986. He took his first cello lessons at the age of 8 with Alfred Felder. From 2001 on, he studied with Rebecca Firth at the Zurich Conservatory of Music’s Music School. After graduating from high school in 2006, he continued his studies with Thomas Grossenbacher in Zurich. Flurin graduated with distinction in 2009, obtaining his Teaching Diploma. In 2012, he completed his Master’s in Cello Performance with Clemens Hagen in Salzburg, also with distinction.

Throughout his studies, Flurin Cuonz won several competitions: the 1st prize in the Kiwanis competition for cello at the Zürich University of the Arts in 2008; student prizes at the instrumental competition of the Migros Culture Pourcent in 2009 and 2010; and acceptance into the concert program of the Migros Culture Pourcent cello competition. He was awarded first prize in the cello competition Enrico Mainardi at the Mozarteum University Salzburg in 2010 and the music prize of the Kiefer Hablitzel Foundation in 2012. After a successful internship in 2008/09, he was granted the position of newcomer/assistant at the Tonhalle Orchestra Zurich.

In addition to other chamber music projects and solo performances, Cuonz held an interim position as solo cellist at the Musikkollegium Winterthur from September 2014 to February 2015. He is, among others, a regular guest solo-cellist with the Bamberg Symphony Orchestra, the Wuppertal Symphony Orchestra, the Camerata Salzburg and the Mahler Chamber Orchestra.

He plays a cello made by Peter Westermann in 2003. 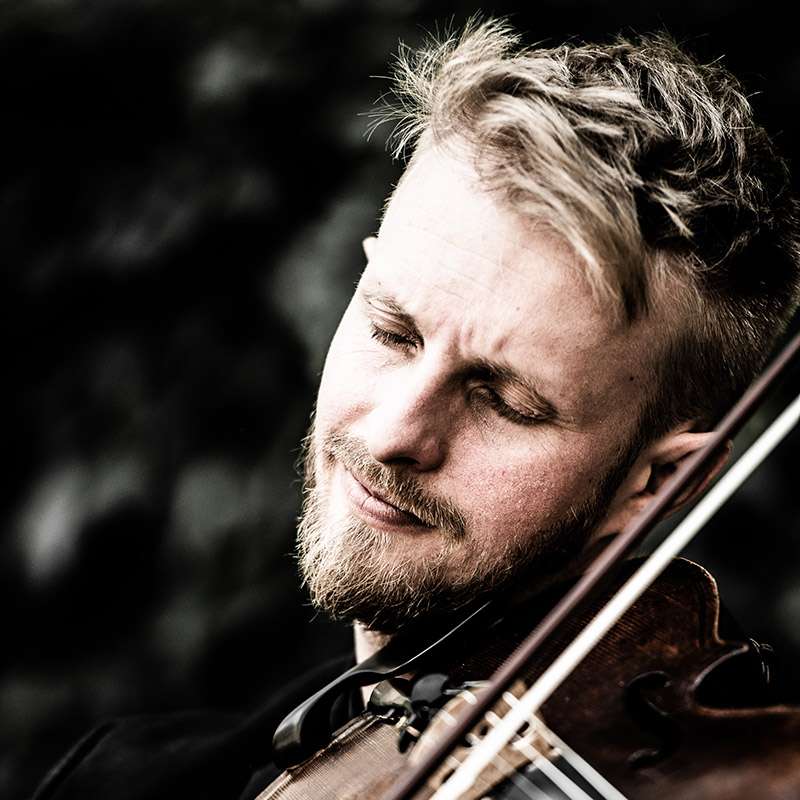 Manuel Hofer, born in Graz/Austria, studied with Siegfried Führlinger at the University for Music and performing Arts Vienna, Thomas Riebl at the University Mozarteum Salzburg and the Hanns Eisler University for Music with Lars Anders Tomter and Tabea Zimmermann. His passion for chamber music has been fueled and supported by his work with Rainer Schmid of the Hagen Quartet, Eberhard Feltz at the Hanns Eisler University of Music and György Kurtag.

His activities as a chamber musician led to collaborations with ensembles such as the Armida Quartet, Quatour Ardeo or Trio Image and performances in Festivals in Europe, Asia and South America.

Being open and versatile is an important aspect of Manuels life as a Violist. His regular participation in Dorothee Oberlingers Ensemble 1700 or the premiere performance of Samir Odeh-Tamimi’s Viola Concerto “Samas” and his performance prize of the International Stockhausen Society are only two examples for his passion and interest for both historic performance practice and contemporary music.

He holds a teaching position at the University of Music and performing Arts in Stuttgart. 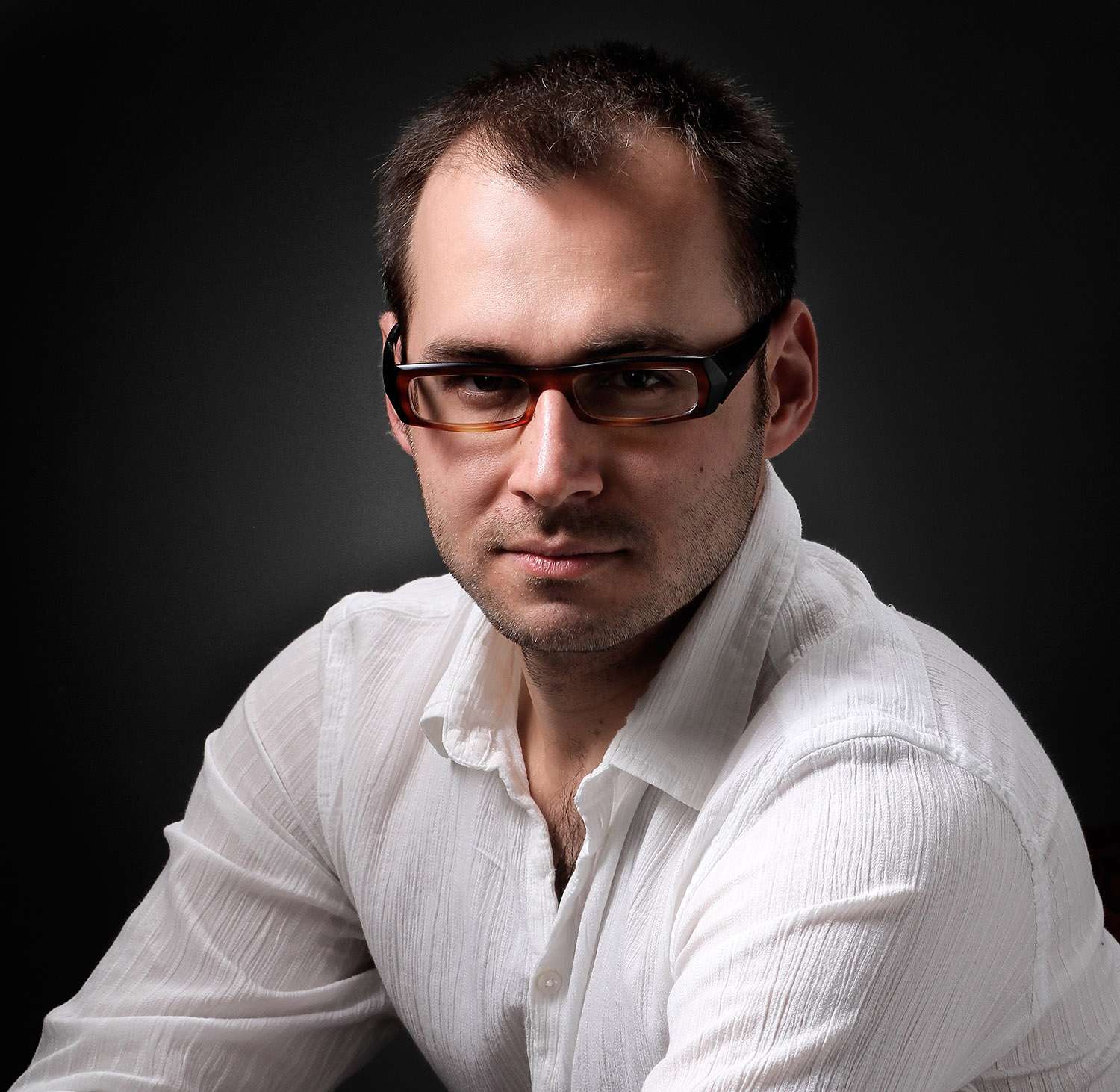 Dr. Rok Palčič is active as a soloist, chamber musician, pedagogue, masterclass clinician, and competition juror. He successfully combines a broad range of experiences with his passion for entrepreneurial pursuits and organizing cultural events.

He started his musical education at the age of five and only a few years into his studies, Russian professor and pianist Sijavush Gadjiev invited him to join his studio. Gadjiev later introduced him to renowned pianist, pedagogue, and International Chopin Competition laureate Pavel Gililov, with whom he continued his studies at the Hochschule für Musik in Cologne, Germany. After graduating in 2009, he decided to broaden his interests by choosing to pursue a graduate degree in chamber music performance. He moved to Graz, Austria, to study with Chia Chou, pianist and co-founder of the Trio Parnassus. After completing his second master’s degree, he briefly occupied a teaching position in his home country before emigrating to the United States. During his studies he also took part in several master classes with pedagogues and pianists Aldo Ciccolini, Deniz Galenbe, Ronald Pröll, Kolja Lessing, Jeremy Denk, and others.

In 2003 he was awarded the Škerjanc prize for exceptional musical achievements. In 2007 he performed at the Ruhr Klavier-Festival in Germany and was also awarded the YEHUDI MENUHIN Live Music Now foundation scholarship. His performances at prestigious festivals, as well as prizes from national and international competitions, have taken Palčič to venues across Slovenia, Italy, France, Croatia, Austria, Germany, the Czech Republic, Spain, the United Kingdom, and the United States. He performed with renowned artists, such as Koryun Asatryan, Ida Bieler, Ofer Canetti, Dudu Carmel, Nora Romanoff-Schwarzberg, Steven Thomas, Benjamin Ziervogel, Andrej Žust, and others.

In addition to his concert and pedagogic activity, Rok Palčič is founder and artistic director of the Cultural Arts Society Ars Haliaeti, focused on organizing educational and artistic events. Its central project, the Masterclasses Haliaeti Summer Academy, held on the Slovenian coast since 2011, continues to attract talented aspiring musicians as well as the finest renowned artists from all over the world, who deliver unforgettable master classes and performances.

After coming to the United States in 2014 to complete his third master’s degree at the University of Florida, he was offered a 2-year post as Visiting Assistant Professor of Piano and Chamber Music. His doctoral research at the University of Maryland was focused around rediscovering forgotten music by Late-Romantic composers—particularly the premiere recording of the collective piano solo works by French composer Melanie Bonis—as well as paying tribute to the great masterpieces of our canon, such as Brahms’s complete Sonatas for Piano and Violin, which he recorded with Žiga Brank for the Slovenian ZKP label in 2019.

While performance and pedagogy remain his main focus, he devotes a sizable amount of effort to managing two companies Chevy Chase Music LLC and Music School 21 LLC, which cater to the musical and educational needs of various audiences.

Our faculty will delight us with yet anoter exquisite program.

There are just so many places to visit in our little town, but here is a list of “pre-approved” choices.